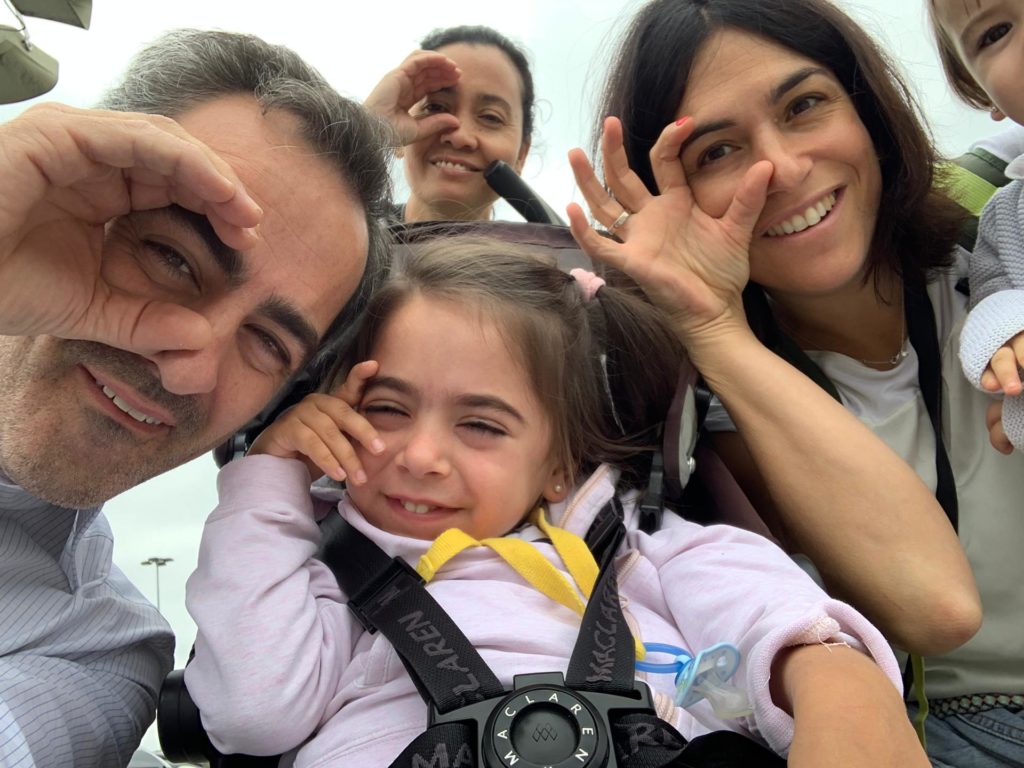 Marta is a four-and-a-half-year-old girl with Niemann Pick C. This is a rare neurodegenerative genetic disease that she was diagnosed with in its most severe form: that of childhood early onset. Despite the hardships of her daily life, Marta has decided to embark on a voyage to find a cure, with the hope and support of her parents and hand in hand with the Columbus Foundation. Ignacio is her father. We spoke to him so that we could learn a little bit more about Marta and the initiative ‘The voyage of Marta’, that alongside Ana, his wife, they created. The initiative begins on the 27th of September with a charity evening in Madrid.

The disease of Niemann Pick C (NPC) is a rare genetic neurological illness. Due to a defect in the DNA, the proteins required for the transport of cholesterol are not produced resulting in its accumulation inside the cells. The failure to remove the cholesterol causes structural damage and the functional inability of these cells. Core organs are affected such as the lungs, liver, spleen, and neurons. The organism progressively deteriorates causing serious neurological damage.

When did you know about the diagnosis?
She was diagnosed when she was two months old. In a routine check-up, the pediatrician saw that her liver and spleen were swollen. He recommended we hospitalized her for 10 days in the University Hospital in Brussels. Here, they ran many tests including a procedure where she was put to sleep with anesthesia so that the doctors could obtain samples from different parts of the body. As the days went by, they ruled out more and more diseases that were less severe, and everything seemed to point towards the worst diagnosis of all, Niemann Pick C.

During these past four years, we have learned from other cases that we have seen that we were incredibly lucky to have had such a fast diagnosis and that the doctors were able to give this rare disease a full name.

What solutions were you given when Marta was diagnosed?
To be honest, we can’t remember it well. That time was extremely hard. We didn’t understand anything and we couldn’t believe that this was happening to us. Everything became even more complicated as we were living abroad, we had no family close by, and because we didn’t know what resources we could access to understand the disease better and try to cure it.

At the hospital, they had already told us there was no cure, but that there was a medication that would help to delay the development of the disease. They encouraged us to enjoy her as a baby, as her symptoms wouldn’t be as severe and obvious then as they would be in the future.

How does the illness affect the child on a daily basis?

Unfortunately, it gets worse every day. As it’s a degenerative disease, she is progressively losing the few skills that she has developed until now. It was always very difficult for her to eat, move, learn, and do all the things that children her age usually do, even just to crawl or walk. Today, she can’t stand up or eat by herself, her diet is primarily soft foods that she can swallow. The activities that she can do are limited to those that can be done when she is sitting down.

It must be extremely hard for parents to see their child so fragile….
At the same time though, Marta never stops smiling and she loves to sing. She admires her sisters. She laughs a lot when she sees them and with some help, she plays at making food and being at the shops … ‘working’ as she likes to say, as she turns the pages of a book, but always with help. She can also understand different languages, due to the surroundings of where we live and the school for children with special needs. She is able to communicate and join three words to tell us what she wants, what she does at school and the little things in her daily life. We have two other daughters, one is older; Mencia, and the other younger one; Maria, and despite trying to live a normal life, it is increasingly harder for them as they become more aware of what is happening.

That must have a significant impact on the family.
We feel helpless as we see her worsen and we can’t do anything to prevent it. She takes so many medications and we have to be continuously aware of her every need. However, it is also true that we have learnt to think relatively and have a more profound outlook on life. We appreciate everyday as if it were a gift. All the other things that our daughters can do they observe and appreciate a lot more because they know that other children can’t do them and that teaches them to be better people and help those that need it the most.

We work and fight every day to try and see all the good things that come with Marta and with NPC, because we know that tomorrow those things will be a little diminish, so we don’t stop to suffer instead we enjoy every moment.

What solutions are there to treat this rare disease, or to alleviate the symptoms?
Currently, there are no cures for this disease. There only exists a medication called Miglustat, that currently has been shown to slow down the advancement of the disease, but only for a time. Miglustat is very strong and has many side effects which we treat with other medications. Marta has 17 pills a day. In addition to the medication, we have to work tirelessly with physiotherapists, speech therapists, and other specialists.

These past few years, there are a few medications currently on trial that have been used to treat other diseases that seem as though they could help; Ursochol, an improved version of Tanganil; Efavirenz or Fingolimod. There also exist clinical trials for new medicines like Amiroclomol or Ciclodextrina. Marta is medicated with those that are less invasive and that allow her to have the best quality of life possible.

Unfortunately, none of them offer a cure and their efficacy in improving quality of life hasn’t been completely proven. They work on some patients, but not on others.

How did you come in contact with Columbus Foundation?
A little more than a year ago we met Vanessa, Geri’s mother, who is also affected by NPC. She talked with a lot of enthusiasm and hope about Damià Tormo, the president of the Columbus Foundation and his gene therapy project for other rare diseases.

We had been working with the University College London and the laboratory of the University of Oxford to help them come up with alternatives for the financing of gene therapy in European funds and we knew about the development at a laboratory-based level for NPC. We quickly understood that we could help the Foundation and the research groups in London come into contact. The Association of Niemann Pick of Fuenlabrada was also working towards this direction. We had the opportunity to meet Damià in person in the conference of families organized in the UK in September 2018. Immediately, we saw how wonderful the project was and his commitment to advancing the laboratory phase for gene therapy for NPC into clinical trials with real patients.

How do you think that gene therapy can help Marta?
We think that it can help her quality of life, it can help her mobility, and her health. Of course, we have our concerns and fears that the damages already caused are irreversible, but we also have a lot of hope, for her and for all the others suffering from NPC.

We think that gene therapy can help her improve her health. We hope that she will be able to walk again and eat by herself and that her life will be significantly less limited.

At what stage is the research?
We don’t quite know. We know that there is hope that gene therapy will reach patients soon exits, and we believe in it, but we also treat any progress with humility and respect.

What has been the most complicated moment?
Until now, the most complicated moments have been in her first year and a half of life. After the diagnosis at six months and the severe hypotonia, the most difficult aspect was ensuring she improved her overall health so that she would gain some weight and strengthen her muscles. We commenced physiotherapy sessions so that they could keep her as active as possible. On the other hand, food was a real issue, as she couldn’t absorb the food we gave her well, and we had to overfeed her in order for that to translate into grams at the end of the week.
Now, after a year, we have the impression that the illness is advancing quickly and unfortunately that it is slowly dimming her flame of life.

And the most gratifying?
We don’t know how to explain it. She, in capital letters, brings out the best in everyone that surrounds her. It’s a constant smile and her loving gaze and admiration for everything that is around her, especially her two sisters. It’s hard to describe. She brings out the best in everything that happens to us, as well as all the love and affection we get from people, family, and friends. Having her by our side and enjoying her every day is a gift.

What is behind ‘The voyage of Marta?
This is an initiative that aims at raising awareness of the Columbus Foundation project. Marta is our way of giving a face to the disease that is hardly known around Spain, but that is in great need of research and quick solutions.

Like Cristóbal Columbus, the Columbus Foundation and the children with NPC embark on a project that seems impossible and defy preestablished ideas with the new world of gene therapy. Like Columbus, it is a journey that requires sponsors to finance it. This is the start of Marta’s journey. A cabin girl that is searching, through her telescope, from the crow’s nest of her boat, land ahoy!

How can people participate in this action through social media?

To raise awareness and tell the story, we thought of visualizing it through this initiative. #yoviajoconmarta aims at promoting the concept of gene therapy to combat Niemann Pick C with the Columbus Foundation. The idea is that we join the crew of Marta’s buccaneers and all those with Niemann Pick C with a selfie. With our hands we will make a C for Niemann Pick C and Columbus, emulating at the same time the telescope from which Marta looks into the future.

What message do you have for others that may be experiencing a similar situation?

We would like to thank Columbus Foundation and the Association for Niemann Pick. We would like to raise society’s awareness that these illnesses exist, they may be extremely rare but they are also absolutely devastating. Not enough attention and effort is being put into them which inevitably results in a worsened quality of life for those suffering from them, and we believe that it could easily be avoided with a little more attention towards the problem.

We would like to thank the people for the affection, support and collaboration that we are receiving, these are the true sails of the boat. We would like to remind people that Marta is only one face out of 100 more families in Spain that are suffering this same situation. Lastly, in relation to any type of genetic or rare disease, we would like to share this thought: say at the top of our lungs that the real miracle of humanity is to have healthy children and with genetic diseases, to be born healthy is not a guarantee, therefore just by raising awareness for the ill today, may well be a solution for many tomorrow.